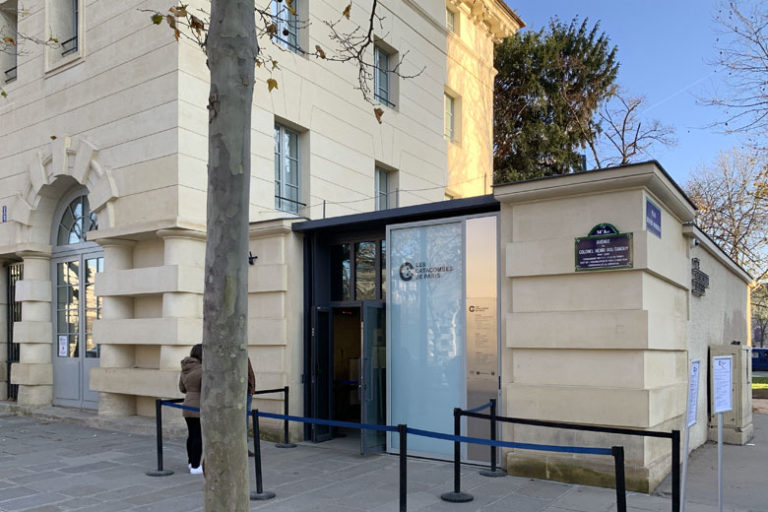 History, facts, legends and travel guide about the Catacombs of Paris, the creepiest destination of Paris, France

The history of the Catacombs of Paris is closely linked to that of its inhabitants. Under the old regime and until the end of the 18th century, families bury their loved ones near their place of worship or convents and monasteries that abound in the capital of the kingdom of France. Moreover, the cost of a burial being beyond the means of the majority of the population, most of the dead are buried in mass graves that adjoin churches and cemeteries. If they are dug to more than 10 meters deep, some pits end up being so full that they sometimes exceed the ground level (continuation below).

Planning your visit to the Catacombs of Paris

The entrance to the Catacombs of Paris is located at the exit of the metro Denfert-Rochereau, on line 4 and 6 of the metro. The address is 1, avenue du Colonel Henri Rol-Tanguy 75014 Paris. For schedules, fares and booking of tickets, you can go directly to the Paris catacombs official website, which is part of the Carnavalet Museum.

As early as the 16th century, doctors who, at the time, were more likely to accelerate the deadly process than to treat their patients, are alarmed at the risks of illness and epidemics that these surcharges of Paris cemeteries take to Parisians. With the almost permanent smell of rotting corpses in many places of the city, are added serious problems of hygiene, because the drinking water ends up becoming contaminated and unfit for any consumption.

The Saints Innocents' cemetery, between the 5th century and its total dismantling by a royal decree November 9, 1785, is the largest cemetery in Paris. It is estimated that all by itself, this cemetery in the historic center, whose location is contiguous to the fountain of the Innocents, at the corner of the rue de la Ferronerie and rue Saint-Denis in the 1st district of Paris, contained more than 2 million corpses.

In view of the epidemics and the life expectancy of the time, the burials were done at an almost industrial pace, with bodies from all the parishes and hospices of the city. The saturation and the health risks ended up overcoming the weight of the traditions especially since, for several centuries, the Church had opposed any change in the way the burials were organized in the capital of the kingdom. It was not until 1765 that a decree of the parliament of Paris made illegal any new intramural burial. Several cemeteries are created around Paris on this occasion, which is not enough to stop the pre-existing mortuary traditions.

When the Saints Innocents' cemetery is finally closed, the cleaning and the transfer of the bones which it contained is organized. For a year and a half, hundreds of thousands of bones are transported to the former underground quarries of Tombe-Issoire, where today the entrance to the catacombs of Paris is located (in the Denfert- Rochereau district).

The geological basin of the Paris region is a kind of gruyère, because for hundreds of years, its basements have been exploited to build homes in the city, greatly reducing construction costs by making almost zero costs of transporting stones. The cave of Butte-Chaumont Park in the 19th arrondissement is one of the few relics of these underground quarries of gypsum still visible today.

The Catacombs of Paris are a small part of the gigantic network of tunnels and old quarries that run under the city. Following the success of the creation of the ossuary of the Tombe-Issoire, other smaller ossuaries were created on the same principle in former gypsum quarries in Paris, but they are not open to visitors. During the Second World War, the underground networks of Paris were regularly used, by resisters of course, and also, of course, by those who practiced the black market.

Inspired by Roman burial practices in underground cemeteries, the name catacomb was quickly attributed to the new municipal ossuary of Paris at the Tombe-Issoire, even if it is only a place of storage of the bones of the city ​​and that the place was not designed for religious purposes.

Open to the public since 1867 the catacombs of Paris represent barely 1% of the underground network of the old quarries of Paris, that is still a 1500 meters course. Remember to put on a sweater before sinking into the bowels of Paris for a gloomy walk of 45 minutes, in a humid and cool atmosphere (14 ° C).

The Catacombs of Paris are one of the most visited monuments of Paris, with nearly 500,000 visitors a year, who have the patience to queue between one and two hours before being able to enter the cave of macabre par excellence.

Many urban legends circulate about the catacombs of Paris. Despite the fact that the place is dark and easy to get lost, a number of Parisians, reckless and eager for strong emotions, ventured to break into it. In the eighties and nineties, many rumors circulated about the catacombs, that skin-heads had made their headquarters inside, or that black masses and cat sacrifices were regularly perpetrated there. Today, the place is much more secure and if the urban legends persist, the shivers they could provoke have diminished at the same time as the unusual or dramatic intrusions in the catacombs of Paris no longer make the headlines.

Planning your travel to Paris

With its 3 international airports (Charles-de-Gaulle, Orly, Beauvais), 7 railway stations, regional trains (called RER), subway (called "Le Métro") and bus network, Paris is easily accessible and it is easy to get around once in the city center. The many road works carried out by the Paris City Council in recent years, officially to decongest traffic and facilitate alternative means of transport to the car, have had the opposite effect, increasing traffic jams and pollution.

That's why, despite its inconveniences (relative cleanliness, overpopulation at rush hour, incivility), the Métro stays the easiest and cheapest way to get from one point to another. Also think of the fact that the center of Paris is relatively small compared to cities like London or Berlin, which allows to walk on foot the many historic districts of the city that radiate around the Island of the City ("Île de la Cité"). This island in the middle of the Seine river, where Notre-Dame Cathedral is located, was, during the Gallo-Roman period, the starting point of Lutèce ("Lutecia", from Latin Lutum which means mud). Lutèce the muddy took the name of Paris from 310 AD. What a journey for this city, which rose from the swamps to become known today as the City of Lights!

Eventually, if you come to Paris by plane, it is better to take the regional train (RER) to reach the city rather than take a taxi, because the disadvantages of a taxi ride (cost, unexpected extra costs, indirect routes, traffic jams) are often a first unpleasant experience for many visitors.

Other monuments and places next to the Catacombs of Paris

On the Place Denfert-Rochereau dominates the statue in copper plates of the lion of Belfort, sculpted by Frédéric-Auguste Bartholdi (1834 - 1904), famous author of the Statue of Liberty. Five models of this same statue, little sisters of the monumental version of Liberty Island in New York, are visible in different parts of Paris, while a model of the golden flame of the Statue of Liberty is located at the Alma's bridge, above the tunnel where Princess Diana tragically died on August 31, 1997.

If you go down the boulevard Raspail to the boulevard Montparnasse, you can discover one of the strangest statues of Auguste Rodin (1840 - 1917). Also accessible from the Vavin subway exit (metro line 4), this is a sculpture of the writer Honoré de Balzac (1799 - 1850) signed, "Rodin to Balzac". Rodin struggled for years to create this statue, which he wanted as an ultimate symbol of the act of human creation, tortuous, grandiose and instinctual. The result, for Rodin's contemporaries and the simple observer today, is puzzling at first sight. The body leaning backwards, the folds of the heavy coat of the author of "The Human Comedy" mask his closed arms and fists held in front of him, which adds to the feeling of unease in front of this figure so bizarre and imposing at the same time. As for the apparently dominant face, it seems agitated by infinite waves of melancholy thoughts. This is the genius of Rodin to have succeeded in using the material of his model, namely this masked body, stretched in a precarious balance, the right foot forward but the body recessed, the face and the hair blending with the drape of his coat, to express the complexity of creation in the making.

Between Vavin street and Montparnasse station, you are at the heart of the historic district of Montparnasse, which was, between the end of the 19th century and the roaring years of the 30s, both one of the most important artistic places of Paris (with Montmartre) and the point of arrival, thanks to the opening of the Paris-Brest line in 1865, of a Breton immigration attracted by the lights of the capital, to the point that the district is also nicknamed at the time the small Britain ("la petite Bretagne"). From this period that saw Pablo Picasso, Apollinaire, Marc Chagall, Chaim Soutine, Jean Cocteau, Ernst Hemingway, Alberto Giacometti, Andre Breton, Amedeo Modigliani, Salvador Dali, Diego Rivera, Marcel Duchamp, Constantin Brancusi and many other great names of 20th century art, there are only a few commemorative plaques recalling the presence of artists' studios where most have worked. The brasseries and cafes they frequented still exist, such as La Coupole, Le Dôme, Le Select, La Rotonde, Harry's Bar, Paris and La Closerie des Lilas. They allow you to immerse yourself for a moment in the nostalgic atmosphere of this era, when Paris was still the artistic beacon of the world. On the other hand, if you sit on a terrace, you will notice that the menu prices of all these restaurants no longer reflect the bohemian life of this glorious time. Finally, if you wonder what is this black tower that stands above the neighborhood, it is the Montparnasse Tower, which most Parisians despise for its ugliness. It can be interesting to climb to the top to observe a view of Paris alternative to that of the Eiffel Tower. It's also the only point of view in Paris where you can not see this unloved tower anymore!

If you have not had your dose of bones for the day after your visit to the catacombs of Paris, you can always take a walk to the Montparnasse Cemetery, put a flower on the graves of Charles Baudelaire, Serge Gainsbourg, Jean-Paul Sartre, Samuel Beckett or Man Ray.

In the category Unusual places in the World