Year of the Pig: Personality, Horoscope for 2023

The Year of the Pig

In brief: The native of the Year of the Pig is stylish, perfectionist and hardworking Chinese zodiac sign. The Pig is a tolerant being, praised by his friends for his kindness and generosity. The Pig has a strong taste for fashion, just as he likes and needs to feel loved.

A true hedonist, the Pig has a voracious appetite for the pleasures of life, especially for carnal pleasures. Although this may make him appear superficial, he is always ready to spend a fortune, only to satisfy his need to please and enjoy life to the fullest.

Year of the Pig: Personality horoscope

Courageous, energetic, proud and jealous, the Pig is often consulted in professional life for his ingenuity and manual skill. Although they can be found regularly in family gatherings or in society, the natives of the Year of the Pig like to be alone and take care of themselves, enjoying small pleasures that would appear insignificant to the other zodiac signs of Chinese astrology.

The Pig enjoys the countryside. When he seeks his inner peace, the call of nature and fresh air becomes a vital necessity for his personal balance. Often dreamy, the apparent robustness of the Pig actually hides an anxious nature.

It is easy to get favors from the Pig. Not knowing how to say no, he becomes fatalistic when he is denied something in return, especially in love. Remarkably polite, he forgives easily. This intelligent and lucky being also appreciates money, not for the power it provides, but because it makes possible the realization of his much needed material comfort.

In work, some people tend to say that the Pig is relatively slow. On the contrary, when he has an idea in mind, the Pig knows very well how to optimize his organization to achieve his project successfully.

His relative honesty makes him instinctively allergic to wrongdoing. When the Pig feels cornered, he turns suspicious, stubborn and hermetic, revealing nothing about his true feeling nor his private life anymore.

Year of the Pig's birth dates

Years and elements of birth for the Chinese zodiac sign of the Pig (Boar) according to the Chinese lunisolar calendar:

Year of the Pig: Fortune

Lucky Colors of the Pig

Lucky Numbers of the Pig

Celebrities born in the Year of the Pig

Year of the Pig: Love compatibility

The Pig (Boar), the Rabbit (Hare, Cat) and the Goat (Sheep) are part of the fourth compatibility triangle of Chinese astrology. Indeed, the Pig, twelfth sign-animal of the zodiac in the Chinese calendar, gets along naturally with the Rabbit and the Goat.

Today's Chinese Horoscope for the Pig

KarmaWeather's Free Daily Pig Horoscope offers unique and accurate predictions for the 12th Chinese zodiac sign. To better understand his Chinese daily horoscope, regardless of the specific interpretation of the consulted period of the current Chinese year, the Pig must monitor the days and months governed by the energetic influence of the Snake (in particular, avoid any trip, operation or signature of contract). On the other hand, the days of the Pig, the Rabbit, the Goat and the Tiger are lucky days for the Pig.

Year of the Pig: Birthstones

Chinese horoscope of the Pig during the Year of the Rabbit 2023, in love, work, career, health, luck, studies and travels

The Chinese horoscope 2023 promises a Chinese New Year heralding prosperity, structuring and enriching interactions for the epicurean Pig aspiring to a life as comfortable as it is sensational. At work, his overflowing creativity is at the heart of an exciting professional development. Indeed, the beneficial growth generated by the fruitful encounter of the Water and Wood elements offers the Pig the chance to be the Chinese zodiac sign most in harmony with the Year of the Rabbit 2023. Reinvigorated by a serene atmosphere, it is a year of reward and validation for the Pig, during which he is able to reap the bountiful fruits of his labor. 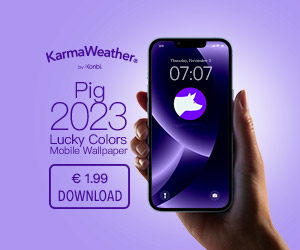 According to the career and work horoscope 2023, the Pig who has faced financial obstacles during the previous year has the opportunity to find on his way the support essential to the manifestation of his material comfort. But before enjoying it, the Pig must first fight against his inclination to unbridled generosity for himself as much as for those he loves. Sobriety, self-discipline and lucidity stripped of all excessive emotion are necessary to maintain this annual conjuncture so promising for him. If he succeeds, the Pig will thus avoid destabilizing the foundations of all the things that have meaning for him. Added to this, the pragmatic spirit with which the Pig must operate and direct his forces in order to give himself the means to achieve the results he expects is fundamental.

Concerning the 2023 love horoscope of the Pig, the Year of the Rabbit encourages the establishment of a healthy and comfortable base before any sentimental adventure. Any vague, uncertain or even resurrected connection from the past should be avoided as much as possible, because the Year of the Rabbit calls the Pig, so often reckless in love, to persistent caution. On the other hand, a second chance can be considered for sentimental stories that occurred during the year 2023 but which could not initially germinate due to a flagrant lack of support (from family or friends) or a technical problem (geographical distance, cultural proximity, etc.). At the same time, the Chinese New Year offers great opportunities for the single Pig in terms of quality relationship opportunities, while the Pig already in a relationship can hope to consolidate territories already acquired.

Talismans and lucky charms 2023 of the Pig

Below, in accordance with the Chinese horoscope, you will find a detailed description of the personality and specificities of the 5 existing types of Pig, which associate the terrestrial branch of the Pig with the 5 Yin celestial trunks of WuXing and Feng Shui (Yin Wood, Yin Fire, Yin Earth, Yin Metal, Yin Water). Indeed, the Pig being a Chinese astrological sign with Yin polarity, the elements of Nature to which he can be connected are always in their Yin form. Likewise, for each Pig associated with his celestial trunk (Wood Pig, Fire Pig, Earth Pig, Metal Pig, Water Pig), discover the pillar of destiny he is associated with and its meaning, in relation to its imaged destiny.

Personality: The native of the Year of the Wood Pig stands out for his remarkable openness and sociability. Appreciated by his circle of friends, he's generous and optimistic, sometimes even a little naive. The Wood Pig knows how to forgive his enemies, which can sometimes lead malicious people to try to abuse his kindness. The gluttony of the Wood Pig is equaled only by his magnanimous nature.

Imaged destiny: "Fire at the top of the mountain" (Yin)
Meaning of the Wood Pig's birth pillar: Courage and clairvoyance, lucidity and instinctive mistrust, great creativity and predisposition to artistic and intellectual trades, taste for life, ability to appreciate pleasures as to overcome sorrows.

Personality: The person born in the Year of the Fire Pig is curious, determined and playful. He is an epicurean, whose intense and constant search for pleasure can sometimes lead him to lose his footing with reality. If the Fire Pig has a tendency to accumulate objects and riches around him to reassure himself, he's none the less generous and attached to the well-being of those he loves.

Personality: More reasonable and more robust than his fellows, the native of the Year of the Earth Pig manages to achieve his projects thanks to his strategic vision and his skill in business. Joyful and responsible, greatly attached to his family, the Earth Pig doesn't count his time or energy when it comes to feeding and protecting his loved ones.

Imaged destiny: "The wood of the plains" (Yin)
Meaning of the Earth Pig's birth pillar: Creative temper, ability to invent and develop new projects, talents for communication, risk of weariness and frustration from wanting to do everything at once.

Personality: The person born in the Year of the Metal Pig is the most expansive of his fellows. Open to the world, his direct speech, devoid of any artifice, can sometimes attract to him unexpected enemies. Gifted with a lively and voluntary character, a true workaholic, the Metal Pig must temper his emotions. Indeed, the excesses of anger manifested by the Metal Pig are flaws that he must learn to control, especially if he wishes to avoid people using his own defects against him.

Imaged destiny: "Gold ornaments and hairpins" (Yin)
Meaning of the Metal Pig's birth pillar: Irresistible charisma and elegance, flexibility of mind and lucidity, ability to understand the world in its aesthetic dimension and to give a market value to artistic objects, risk of superficiality and emotional imbalance.

Personality: The native of the Year of the Water Pig is the most diplomatic, the most skillful, but also the most narcissistic of the Pigs. No expense is too expensive in his eyes, as long as he decides that it's necessary to improve his dressing-room, to renew her interior decoration or to nourish his delicate palate. Extremely sensual, sometimes credulous (like all Pigs), the Water Pig is the most typical representative of the 12th sign of the Chinese zodiac. The Water Pig particularly appreciates luxury and worldliness. His hedonism and ferocious appetite for all the pleasures of life can, if not tempered, lead him on hazardous roads.

Imaged destiny: "The water of the great ocean" (Yin)
Meaning of the Water Pig's birth pillar: Sure taste and incomparable sense of aesthetics, multiple talents except for the military trades, sometimes airy and virtuoso or on the contrary placid and inconsistent, risk of brazen opportunism and tenacious grudges in the event of imbalance with the other pillars.