Year of the Horse: Personality, Horoscope for 2023

The Year of the Horse

In brief: The native of the Year of the Horse has an excellent sense of humor and a rare talent for self-mockery, which he tends to lose with age.

The Horse's ability to make fun of himself turns him into an ideal friend to spend quality time with, despite a slight tendency to selfishness in the way he tends to lead his life.

Year of the Horse: Personality horoscope

Even though the Chinese zodiac sign of the Horse is very loyal in friendship, his constant need to live new experiences and adventures in unexplored lands is a source of discomfort for his more sedentary companions. He is in general an accomplished sportsman and an amateur of open air sports practices.

Always passionate and surprising in love, the Horse finds nothing more attractive than a journey to the unknown. If you try to restrain a Horse by depriving him of his freedom, he can become intolerant and aggressive, constantly ruminating his dissatisfaction, like a little daily story which you will have to undergo the inconveniences.

The Horse is very fast and efficient in his work. However, the quality of his production can sometimes suffer from a lack of preparation and research upstream, especially since he doesn't necessarily like to ask for advice, as he thinks he is fully self-sufficient. In spite of the sometimes perfectible quality of his achievements, the Horse always finds an audience to applaud him warmly and to congratulate him with devotion, as his persuasiveness can be very effective.

In love, the Horse's concern for independence, demonstrated by his ability to pack his bags overnight, doesn't mean that he appreciates loneliness. He would prefer to be at the origin of a possible separation rather than being abandoned against his will. A good lover, always sensual and charming, the Horse must however learn moderation and patience if he wishes to preserve peace and serenity within his home.

More than money, it is strong emotions that the Horse seeks to live in priority, in order to feel fulfilled in his life. Despite his self-sufficiency and latent selfishness, the Horse can be surprisingly generous to weaker than him. Indeed, his noble nature and his thirst for exceeding his limits prevent him from falling into the mean and jealous comparison of his neighbor. On the contrary, he must rather guard himself from the temptation to withdraw from the world for having contemplated it for too long from the top of his rare snow-capped peaks still untouched by human pollution.

🐴 Which kind of Horse are you?

Year of the Horse's birth dates

Year of the Horse: Fortune

Lucky Colors of the Horse

Lucky Numbers of the Horse

Celebrities born in the Year of the Horse

Year of the Horse: Love compatibility

Today's Chinese Horoscope for the Horse

KarmaWeather's Free Daily Horse Horoscope offers unique and accurate predictions for the 7th Chinese zodiac sign. To better understand his Chinese daily horoscope, regardless of the specific interpretation of the consulted period of the current Chinese year, the Horse must monitor the days and months governed by the energetic influence of the Rat (in particular, avoid any trip, operation or signature of contract). On the other hand, the days of the Horse, the Tiger, the Dog and the Goat are lucky days for the Horse.

Year of the Horse: Birthstones

Chinese horoscope of the Horse during the Year of the Rabbit 2023, in love, work, career, health, luck, studies and travels

The Horse's 2023 Chinese horoscope announces a complex, varied and stimulating year, punctuated by situations rich in surprises and twists and turns for this energetic and good-natured Chinese zodiac sign. The events with which the Horse will be confronted during his main activities will seem to him too slow, too fast, or even superficial. The type of cadence the Horse will face will not always match his ideas, his vision or his way of doing things. Thus, after a commercially structuring Year of the Tiger, during which he was able to find a satisfactory balance, it is now time for the Horse to take a break and reflect on the direction necessary to ensure maximum balance and success for himself. Therefore, it is all his intimate convictions that will have to be reconsidered with distance and wisdom. 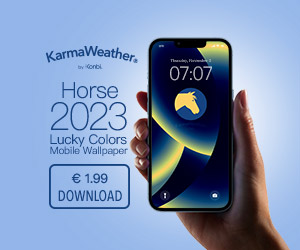 According to the Horse's 2023 money and work horoscope, a whole program of consolidation of achievements awaits the vigorous and impatient 7th Chinese zodiac sign. In 2023, the Year of the Rabbit promises the Horse success, if he decides to complete his professional skills through training or intensive learning sessions. The sooner he decides, the more he will be able to stay one step ahead of his competitors.

In terms of investments, the good news strews the path of the Horses in a hurry to increase their financial resources. From now on, the Horse is able to reap the fruits of his past commitments. And if he has a little money aside, he can even decide to get actively involved in promising companies, allowing him in the medium term to increase his material comfort. However, if he does not take the trouble beforehand to put in place a strategy that will secure his property in all circumstances, he risks only being the lucky winner of a fleeting victory.

According to the Horse's 2023 love horoscope, it is chiefly at the family level that developments can be noted in this Year of the Rabbit. It can be a birth or new arrivals with whom the Horse will be forced to deal with, with limitations of his space of freedom as a counterpart. It can also be a matter of supporting a loved one who urgently needs his help. Concerning the single Horse, short-term encounters and unions could lead him to lose confidence in his seductive abilities. Above all, he must keep in mind that some suitors do not deserve so much space until their relationship is established. The Horse is advised not to place too much hope in an equivalent reciprocity of his efforts, at the risk of being disappointed by the unsuspected weather vanes of ungrateful hearts.

Talismans and lucky charms 2023 of the Horse

Below, in accordance with the Chinese horoscope, you will find a detailed description of the personality and specificities of the 5 existing types of Horse, which associate the terrestrial branch of the Horse with the 5 Yang celestial trunks of WuXing and Feng Shui (Yang Wood, Yang Fire, Yang Earth, Yang Metal, Yang Water). Indeed, the Horse being a Chinese astrological sign with Yang polarity, the elements of Nature to which he can be connected are always in their Yang form. Likewise, for each Horse associated with his celestial trunk (Wood Horse, Fire Horse, Earth Horse, Metal Horse, Water Horse), discover the pillar of destiny he is associated with and its meaning, in relation to its imaged destiny.

Personality: The native of the Year of the Wood Horse is the most affable of his fellows. Funny and optimistic, his company is always pleasant, even in difficult times, when he will always know how to de-dramatize the situation with tact and benevolence. Imaginative, lucid and open to the world, the Wood Horse draws his strength and his courage in the exploration of new territories that nourish his fertile imagination.

Imaged destiny: "Gold in the sand" (Yang)
Meaning of the Wood Horse's birth pillar: Insolent luck, material success achievable without too much difficulty, risk of loss of sense of reality and sentimental dissatisfaction.

🐴🌳 Learn more about the Year of the Wood Horse

Personality: Intelligent and charismatic, the person born in the Year of the Fire Horse finds it difficult to remain focused when he carries out tasks that are too simple and repetitive for his taste. Gifted with two energetic flows of Fire, both through his Chinese zodiac sign and thanks to the element of his year of birth, the Fire Horse is an enthusiast, overflowing with passion, always charming and even frivolous at times. Surprising his entourage by his intellectual acuteness, no one remains insensitive to this noble animal, at once proud and indomitable.

Imaged destiny: "The water of the heavenly river" (Yang)
Meaning of the Fire Horse's birth pillar: Loyalty of feelings, passionate love but without tomorrow, heightened artistic sensitivity, lucidity on the human soul, fear of rejection, risk of loneliness.

🐴🔥 Learn more about the Year of the Fire Horse

Personality: Thoughtful, lover of the great spaces, the native of the Year of the Earth Horse is the most docile of his congeners. Equipped with a natural flair to locate successful investments, the Earth Horse is a natural-born strategist. Cautious, even slow in his decision-making, but always insightful and clairvoyant.

🐴🗿 Learn more about the Year of the Earth Horse

Personality: Popular and impetuous, serious and efficient in his work, also endowed with a great sex appeal, the person born in the Year of the Metal Horse surprises his friends with his apparently inexhaustible energy. His thirst for knowledge is matched only by his great creativity. The Metal Horse can flourish in many professions, notably as a lawyer, economist, explorer, doctor, psychiatrist, chemist or craftsman.

Imaged destiny: "The earth by the road" (Yang)
Meaning of the Metal Horse's birth pillar: Relative stability and balance, need to make constant and regular efforts, persevering and efficient work, strong ambition to overcome all the trials of life.

🐴🛠 Learn more about the Year of the Metal Horse

Personality: The native of the Year of the Water Horse is an intellectual, but also naturally worried. His sense of humor is legendary with his friends. Being as voluble as he can be unconvincing, the Water Horse must learn to give himself limits in order to be able to get to the end of his fabulous projects. In business, he's an excellent negotiator.

Imaged destiny: "Poplar and willow wood" (Yang)
Meaning of the Water Horse's birth pillar: Love of beauty and the Arts, romantic and willingly frivolous, tendency to excessive daydreaming, possibility of great successes provided you show perseverance in your efforts.

🐴💧 Learn more about the Year of the Water Horse