Year of the Tiger: Personality, Horoscope for 2023

The Year of the Tiger

In brief: The Chinese zodiac sign of the Tiger, gifted with a charismatic personality, can easily attract the sympathy of friends and strangers alike.

The innate magnetism of the Tiger, which is the main trait of his personality, provides him with an exciting and passionate life, in accordance to his aspirations.

Year of the Tiger: Personality horoscope

Noble and proud, loyal and generous, the Tiger has an intense and permanent need to spend the inexhaustible energy that lies in him. As a risk-taker and fearful of monotony, the Tiger doesn't hesitate to change course without turning around, with the sole aim of being able to find a passionate environment that will allow him to revive the flame of his unique personality.

In the sentimental domain, the indomitable and libertine Tiger multiplies the conquests during his life, until he finally finds a partner able to satisfy his insatiable vital appetite. The Tiger will guide and love his partner as long as they continue to share the same degree of intensity. If the couple were in danger, the Tiger would be the first to break free of the relationship. However, he shall always withdraw with the grace and distinction that characterize him so well.

The tenacity, the courage and the leadership of the Tiger are undeniable advantages for the company which has the chance to count him as part of their staff. In order to make the most of the Tiger's talents, it is better to leave him a free hand and not to submit him to a strict hierarchy of which he would not bear the constraints. In business, the Tiger can become a formidable competitor, provided he masters his natural instincts and manages to become less egocentric and more patient. An excellent negotiator, the Tiger is a good speaker and he generally handles several languages with ease.

If he is dissatisfied or frustrated by a professional experience for which he had fully invested himself, the Tiger can decide to let go with reality and then venture into risky initiatives. He can count on his friends to make him aware that it is impossible for anyone, even him, to win every time and that it won't be long until he find all his superb again.

Finally, let's not forget that the Tiger, majestic and acrobat, always manages to fall back on his feet and to take the advantage of the most desperate situations.

🐯 Which kind of Tiger are you?

Year of the Tiger's birth dates

Year of the Tiger: Fortune

Lucky Colors of the Tiger

Lucky Numbers of the Tiger

Celebrities born in the Year of the Tiger

Year of the Tiger: Love compatibility

Today's Chinese Horoscope for the Tiger

KarmaWeather's Free Daily Tiger Horoscope offers unique and accurate predictions for the 3rd Chinese zodiac sign. To better understand his Chinese daily horoscope, regardless of the specific interpretation of the consulted period of the current Chinese year, the Tiger must monitor the days and months governed by the energetic influence of the Monkey (in particular, avoid any trip, operation or signature of contract). On the other hand, the days of the Tiger, the Horse, the Dog and the Pig are lucky days for the Tiger.

Year of the Tiger: Birthstones

Chinese horoscope of the Tiger during the Year of the Rabbit 2023, in love, work, career, health, luck, studies and travels

According to the Chinese horoscope 2023 of the Tiger, it is following a year rich in complex events, strewn with risk-taking and bad calculations, that the Tiger can finally recover from emotions which were beginning to seriously tire him. On the occasion of the Year of the Rabbit 2023, a long restructuring period of rest is looming for the Tiger. The 3rd sign of Chinese astrology, irritated by territorial disputes and tired of fighting battles, can count on the beneficial energies of the tender Rabbit to ease the ambient tensions. In 2023, the Tiger prefers to show his fangs to smile than to bite. Indeed, even if he is not used to it, he will be touched many times by outbursts of tenderness and generosity from those around him and even from complete strangers, whether in a supermarket queue or at the counter of Tax Administration. Without even realizing it, the Tiger will mirror the beautiful shades of color that others have drawn on his proud chest. Claws drawn in, this time the Tiger learns to forgive and show empathy, despite his usual distrust of this type of feeling. If it works, it is because he will have managed to exercise it on himself before others, sometimes even with those who had yet taken pleasure in playing with his limits. 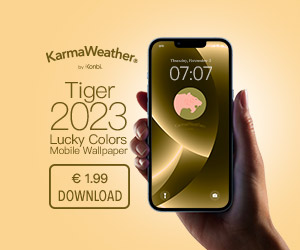 However, the Tiger is one of the Chinese zodiac signs that are not the type to turn a blind eye when it comes to attacking. Whatever his social status, the first enemies of the Tiger are his own emotions when they place him outside the traditional and joyful path to which he aspires. Too often he indulges in addictive behaviors, thinking thus to better understand his problems while giving himself the illusory sensation of a very fragile stability. In reality, this pushes him insidiously, when it comes to his real life goals, to live in an almost permanent state of procrastination. Whether it's through a frantic escape in hard work, an addiction to games, a materialistic obsession, money, social status, carnal pleasures, drugs or even artificial paradises, everything is possible for a disoriented Tiger. Unfortunately, these self-destructive behaviors do not solve much and even compromise the natural winning temperament that the Tiger receives at birth.

Because of this, the Tiger will feel with regret that he does not have much time to let himself be lulled by the advice that the Rabbit gives him, however fair and soothing they may be. Unless he has suffered a heavy defeat during a fierce fight, the stubbornness of the Rabbit will remind him in 2023 that between two fluffy caresses, he still has land where he must learn to hunt to realize whether salt water of a reckless existence is that bad. And in the event of a lack of objectivity, this Year of the Rabbit 2023 can quickly turn into a repeat year of his own Year of the Tiger 2022, filled with vindictive paws and acrobatic pirouettes. Also, it is up to the Tiger to learn the right lessons from his past mistakes, even if it means sacrificing certain habits, in order to clear a path of happiness and serenity which is not so inaccessible after all.

Talismans and lucky charms 2023 of the Tiger

Below, in accordance with the Chinese horoscope, you will find a detailed description of the personality and specificities of the 5 existing types of Tiger, which associate the terrestrial branch of the Tiger with the 5 Yang celestial trunks of WuXing and Feng Shui (Yang Wood, Yang Fire, Yang Earth, Yang Metal, Yang Water). Indeed, the Tiger being a Chinese astrological sign with Yang polarity, the elements of Nature to which he can be connected are always in their Yang form. Likewise, for each Tiger associated with his celestial trunk (Wood Tiger, Fire Tiger, Earth Tiger, Metal Tiger, Water Tiger), discover the pillar of destiny he is associated with and its meaning, in relation to its imaged destiny.

Personality: The native of the Year of the Wood Tiger is the most tolerant, fair and generous of his fellows. However, his discretion as to what his real intentions are can't completely hide his secret ambition of conquest and power. Highly creative, the Wood Tiger, like his fellow Tigers, is quite reluctant to subordination. He should learn to correct his lack of organization and enhance his sense of responsibility.

Imaged destiny: "Water from the great spring" (Yang)
Meaning of the Wood Tiger's birth pillar: Great generosity, importance of family and friends, preference for country life and attraction to jobs in contact with nature, subject to gloom and self-imposed loneliness.

🐯🌳 Learn more about the Year of the Wood Tiger

Personality: The person born in the Year of the Fire Tiger has a seemingly inexhaustible energy. Unpredictable, turbulent, always moving, the Fire Tiger likes to live on a day to day basis. His freedom is priceless. Besides, he doesn't like social conventions, in which he doesn't recognize himself. Charismatic and flamboyant, the Fire Tiger knows perfectly how to effectively convince others that his interests are also theirs. Theatrical and generous, the Fire Tiger has the natural qualities of a leader, being instinctively domineering, brilliant, and always eager to listen to the people he's responsible for.

🐯🔥 Learn more about the Year of the Fire Tiger

Personality: Gifted with a steady and realistic nature, the native of the Year of the Earth Tiger is supposed to be the most intellectual of all Tigers. His integrity, his curiosity and his insight are amongst his best qualities, however tempered by his excessive pride and his relative stiffness. If he usually likes his job, his boundless caution can sometimes become an impediment to his studies and to the evolution of his career.

Imaged destiny: "The earth on the ramparts" (Yang)
Meaning of the Earth Tiger's birth pillar: Protection and heroic courage, spontaneous and disinterested acts in the service of the weakest, risk of paranoia and voluntary solitude, need to remain open and curious in the face of the unknown to avoid any isolationist temptation.

🐯🗿 Learn more about the Year of the Earth Tiger

Personality: The person born in the Year of the Metal Tiger greatly appreciates solitude and never flourishes as much as when he's in a competitive environment. If his charm and his energy fascinate his entourage, the Metal Tiger can also show anxiety and idleness. Like a spoiled child, he often has a hard time resisting his immediate desires.

Imaged destiny: "Century-old cedar and pine wood" (Yang)
Meaning of the Metal Tiger's birth pillar: Wisdom and patience as cardinal virtues, analytical and reasoned thinking, conducive to the medical professions (researchers and doctors), risk of strong frustration if caution is abandoned in favor of an immediate search for results.

🐯🛠 Learn more about the Year of the Metal Tiger

Personality: Curious, objective, philosopher, serene, sociable, diplomat, realistic, having a strong sense of responsibilities, lucid about himself and others, these are just a few of the many qualities of the person born in the Year of the Water Tiger. Highly intelligent, he must however be careful to avoid losing too much time trying to solve non winnable conflicts.

Imaged destiny: "The metal of the mirror" (Yang)
Meaning of the Water Tiger's birth pillar: Strength of conviction, irresistible charm, luminous and limitless ambition, risk of narcissism and superficiality, need to maintain a constant spiritual nourishment to remain balanced.

🐯💧 Learn more about the Year of the Water Tiger