Year of the Rat: Personality, Horoscope for 2023

The Year of the Rat

Very comfortable in society, it is difficult to resist his sense of humor, as he manages to deal with salacious subjects with a surprising subtlety.

Year of the Rat: Personality horoscope

Knowing perfectly how to make his interlocutors feel comfortable, the Rat nevertheless abstains from establishing a balance of power within the limited framework of a discussion. He is indeed sufficiently sophisticated and cunning to almost never need to resort to primitive forms of communication, such as intimidation or violence.

The Rat has a very dynamic and positive personality, which helps him set ambitious life goals for himself. Moreover, his meticulous and persevering nature allows him to successfully complete long-term projects.

His undeniable magnetism and intelligence arouse the curiosity and fascination of both his friends and his enemies, who fear him with reason. The Rat having the defects of his qualities, he will not hesitate to use the most obscure subterfuges to obtain what he seeks, for the pleasure of the game, to earn money easily or to take revenge on someone who would have had the presumption to steal him.

Indeed, of a subtle and penetrating nature but also opportunistic and greedy, the thirst for wealth of the Rat seems disproportionate and his will to climb the social ladder insatiable. He might well and wrongly be suspected to be venal. However, money is in fact for him the only guarantee of security that can appease his existential anxieties.

In a romantic relationship, the person born during the Chinese Year of the Rat is very passionate and involved in his couple and marriage. However, when he feels betrayed or neglected emotionally, he can easily let his heart dominate him. After a break-up, like a soul in pain, he wanders in constant agitation, between the warmth and the coldness of his lost hopes. Fortunately, he usually quickly gets back to his senses, because he can't stand to stay alone for too long. Individualistic when it comes to his own interests and his wallet, he doesn't have a particular liking for loneliness and is fully aware of what a warm and loving home can bring as benefits.

🐭 Which kind of Rat are you?

Year of the Rat's birth dates

Year of the Rat: Fortune

Lucky Colors of the Rat

Lucky Numbers of the Rat

Celebrities born in the Year of the Rat

Year of the Rat: Love compatibility

Today's Chinese Horoscope for the Rat

KarmaWeather's Free Daily Rat Horoscope offers unique and accurate predictions for the 1st Chinese zodiac sign. To better understand his Chinese daily horoscope, regardless of the specific interpretation of the consulted period of the current Chinese year, the Rat must monitor the days and months governed by the energetic influence of the Horse (in particular, avoid any trip, operation or signature of contract). On the other hand, the days of the Rat, the Dragon, the Monkey and the Ox are lucky days for the Rat.

Year of the Rat: Birthstones

Chinese horoscope of the Rat during the Year of the Rabbit 2023, in love, work, career, health, luck, studies and travels

The Chinese New Year of the Water Rabbit 2023 foresees a mixed period for the Rat, punctuated by complex situations, not always easy to manage on a daily basis. However, no change or dramatic upheaval is to be expected for the Rats who live in the countryside, in the comfort of a rural life far from the population centers of the big cities. Fortunately for the City Rats, the Water Yin element of the year 2023 will subtly activate their communicative force. Their oratorical talent will be a tool as precious as it is essential for the City Rat who wishes to validate his ideas and establish his place in society in the long term. 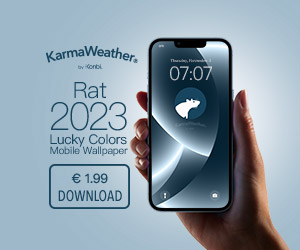 According to the Rat's 2023 horoscope for work and money, the Chinese year will not lack opportunities for him to be listened to and heard, provided he takes the trouble prepare and calibrate their comments upstream. No need to try to unlock inextricable situations (because there will be some). The good deeds and decisions taken in 2023 will provide the Rat with the conditions favorable to his full development the following year, which should therefore be a much more constructive and joyful period. In the meantime, a little mistrust won't hurt him, because rivalries can play tricks on him if he doesn't watch where he puts his feet. Fortunately for him, favorable support will come from new altruistic colleagues, who to his great surprise will take care to protect his interests when he no longer has the strength to fight. When it comes to finances, the Year of the Rabbit 2023 invites the Rat to be thrifty throughout the Chinese year. Borrowing must be strictly supervised and nothing must be left to chance. It is advisable to choose with great care the most opportune moment for the accomplishment of a purchase or a major investment.

Regarding the 2023 love horoscope for the Rat, if everything should happen without much turmoil in the intimate and private sphere, it may be different within the close family. Any occasion for argument must be avoided at all costs. In the event of a breakdown in dialogue or even a risk of separation, it is better to be assisted by someone whose neutrality towards the couple is indisputable.

Talismans and lucky charms 2023 of the Rat

Below, in accordance with the Chinese horoscope, you will find a detailed description of the personality and specificities of the 5 existing types of Rat, which associate the terrestrial branch of the Rat with the 5 Yang celestial trunks of WuXing and Feng Shui (Yang Wood, Yang Fire, Yang Earth, Yang Metal, Yang Water). Indeed, the Rat being a Chinese astrological sign with Yang polarity, the elements of Nature to which he can be connected are always in their Yang form. Likewise, for each Rat associated with his celestial trunk (Wood Rat, Fire Rat, Earth Rat, Metal Rat, Water Rat), discover the pillar of destiny he is associated with and its meaning, in relation to its imaged destiny.

Personality: People born in the Year of the Wood Rat are alert and curious. Their urge to achieve great deeds in life can sometimes put a Wood Rat into hazardous situations. Opportunistic and pragmatic at the same time, the Wood Rat shows remarkable flexibility. Precise, astute, intelligent, but also passionate and anxious, the Wood Rat stands out by his prodigality and his flair for business. The Wood Rat can excel in any artistic field, provided he manages to persevere in his efforts. If faced with a job or a lifestyle that doesn't suit him, the Wood Rat can easily let himself wither altogether.

Imaged destiny: "The gold at the bottom of the ocean" (Yang)
Meaning of the Wood Rat's birth pillar: Inhibition of creative momentum, difficulty getting out of one's own comfort zone, need of a sustained effort to succeed.

🐭🌳 Learn more about the Year of the Wood Rat

Personality: Creative and sociable, people born in the Year of the Fire Rat can only feel at peace and balanced in tangible situations. The Fire Rat is the most generous of his peers, but also the most unruly. Fiercely independent, he's however deeply devoted and chivalrous towards the persons he loves.

Imaged destiny: "Water that penetrates and fertilizes" (Yang)
Meaning of the Fire Rat's birth pillar: Anticipation of actions, transmission of knowledge, enthusiasm overflowing with intentions to the disadvantage of achievements (indecisiveness).

🐭🔥 Learn more about the Year of the Fire Rat

Personality: People born in the Year of the Earth Rat take great care in preserving their tranquility. Earth Rats also need to be reassured by a job remunerative enough to preserve their material comfort in old age. The Earth Rat is the most greedy and the most conservative of his peers. Highly intelligent, he excels in professions that require analysis and organization. Not as interested in the accumulation of money and riches of all kinds as other Rats, the Earth Rat nevertheless works to maintain cordial relations with those less fortunate than himself. Possessive, even stingy when material assets are involved, the Earth Rat may however, while he gets older, learn to appreciate the benefits of generosity.

Imaged destiny: "The fire of lightning" (Yang)
Meaning of the Earth Rat's birth pillar: Strong and combative personality, fertile imagination, gift for organization and management, subject to greed and self-satisfaction.

🐭🗿 Learn more about the Year of the Earth Rat

Personality: A whole character in everything they do, people born in the Year of the Metal Rat love their freedom more than anything else, and hate being prompted or forced into a situation they dislike or have no interest for. The Metal Rat is the most jealous and most domineering of his peers. His thirst for recognition and admiration doesn't seem to have any limits. Brilliant and ingenious when it comes to finding solutions to difficult problems, the Metal Rat however finds it very difficult to accept and learn from his failures. As he rarely enjoys any type of solitude, when he happens to be deprived of the unwavering moral support of his family, the Metal Rat becomes prone to depression. Smart and emotional when he's in a good mood, it's also important to note that he's considered to be the most generous of all Rats.

🐭🛠 Learn more about the Year of the Metal Rat

Personality: The people born in the Year of the Water Rat can tolerate many things to get a benefit from their patience and efforts. The more money a Water Rat earns, the better he / she works. The Water Rat is the most secret, but also the most tender of all Rats. Extremely pragmatic and farsighted, the Water Rat does not engage in a relationship unless he sees some value in it. Very sociable, enjoying a good chat, but also discreet and solitary depending on his mood, the Water Rat isn't the kind of Rat who will seek the spotlight at all costs. Always charming and charismatic, the Water Rat excels as much in negotiation as in revenge, brilliantly combining humor and insight in his relation with others.

🐭💧 Learn more about the Year of the Water Rat