KarmaWeather's Chinese zodiac calculator (from your date of birth) is a free, simple and direct method to learn more about your destiny according to the traditional precepts of the Chinese lunar calendar.

Unlike the Gregorian calendar that we use, which is is a solar calendar, the Chinese calendar is based on the cycles of the Moon. As a consequence, Chinese New Year dates vary each year.

So, if you were born in January or February, it is necessary to check your Chinese sign with our free calculator, as it is likely that your sign corresponds to the zodiac animal of the previous year, rather than the animal that is more broadly associated with your actual year of birth.

On the other hand, if you were born between the months of March and December, you just have to check the table below to find the Chinese astrological sign for your year of birth.

The 12 Chinese zodiac signs and their main personality traits

To go further on this subject:
📅 Chinese horoscope

The 4 compatibility triangles of Chinese astrology

In China, in the period before a wedding, the families of the future spouses always take care to check the astral chart of the candidates to see if their couple can predict a successful, happy and prosperous marriage.

However, if this verification is done late and the couple is not compatible according to the precepts of Chinese astrology, it is always possible to restore balance and marital harmony by providing for the birth of a baby whose sign Chinese zodiac sign is compatible (or neutral) with both parents. Other remedies such as Feng Shui cures are also useful for energy rebalancing in case of acute opposition (eg a Rabbit / Rooster or Horse / Rat couple). 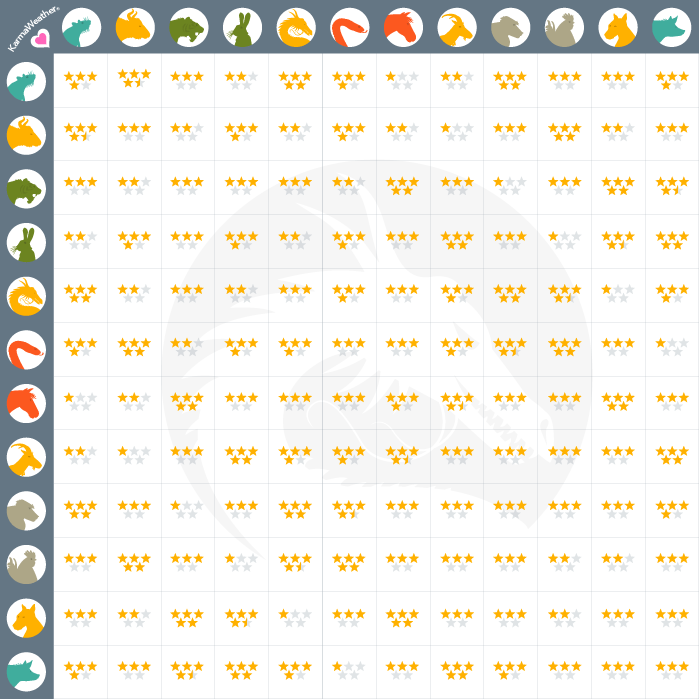 In addition to your identifiable birth element thanks to the Chinese zodiac calculator on this page, also know that each zodiac animal of the Chinese lunar calendar has a main intrinsic element (Fire, Earth, Metal, Water or Wood), whose list for each sign is as follows:

To go further on this subject:
☯ 5 elements' meaning and effects on personality