Year of the Dog: Personality, Horoscope for 2023

The Year of the Dog

In brief: A person born in the Year of the Dog is loyal, friendly and intelligent. The Dog is a Chinese zodiac sign who abhors injustice and always reach out to those in need, making him a natural candidate for humanitarian missions.

If the Dog is deeply fair and just with those he loves, he can also be cold and cynical towards people he doesn't appreciate. He sometimes has short spats of anger and he doesn't hesitate to bite occasionally, especially when he feels that an injustice has been committed. He is willing to be the defender of the widow and the orphan.

Year of the Dog: Personality horoscope

If the Dog is a honest, respectful and fair worker, he also appreciates laziness as a virtue. Gluttony is his sinful sin, while a tendency to hypochondria can be for him a source of anxiety that will push him to isolate himself and take refuge in a gloomy loneliness.

The Dog tends to have a Manichean vision of his relationship with others, who are either friends or enemies. This doesn't mean that he doesn't know how to be indulgent and forgive gracefully, not without having previously expressed his discontent. The Dog is also endowed with a great perspicacity and an unparalleled sense of observation, which he uses in order to better protect his house and his neighborhood, places from which he moves away as little as possible. The Dog naturally inspires confidence, which is convenient for him to convince his friends to always follow him on new journeys.

In love, the Dog is loyal, sensual and deeply devoted to his couple and his family. He may also be jealous and uncompromising, defects for which he must constantly work on himself.

If the Dog prefers to remain discreet about his private life, he never says no to opportunities that could put him in the spotlight. With age, the eleventh sign of the Chinese zodiac can become famous (and more of a loner).

Year of the Dog's birth dates

Years and elements of birth for the Chinese zodiac sign of the Dog according to the Chinese lunisolar calendar:

Year of the Dog: Fortune

Lucky Colors of the Dog

Lucky Numbers of the Dog

Celebrities born in the Year of the Dog

Year of the Dog: Love compatibility

Today's Chinese Horoscope for the Dog

KarmaWeather's Free Daily Dog Horoscope offers unique and accurate predictions for the 11th Chinese zodiac sign. To better understand his Chinese daily horoscope, regardless of the specific interpretation of the consulted period of the current Chinese year, the Dog must monitor the days and months governed by the energetic influence of the Dragon (in particular, avoid any trip, operation or signature of contract). On the other hand, the days of the Dog, the Tiger, the Horse and the Rabbit are lucky days for the Dog.

Year of the Dog: Birthstones

Chinese horoscope of the Dog during the Year of the Rabbit 2023, in love, work, career, health, luck, studies and travels

The Chinese horoscope for 2023 predicts a positive, serene and reasonable year, punctuated with joyful stimulations and welcome surprises. The Year of the Rabbit is the second part of a highly favorable period for the Dog. This year, he takes pleasure in taking over the endeavors that have been left aside for too long. Reassured and supported by the Rabbit, the Dog has the opportunity to discover new virtues and faculties that he did not know he possessed, due to a propensity to pessimism that never leaves him. 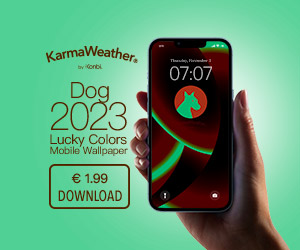 According to the career and work horoscope 2023, with enough discernment and balance, the Dog has no trouble managing his affairs in 2023. If the previous years have not always brought the benefits expected, the Dog can finally afford a comfortable lifestyle, greatly deserved. Rested and far from conflicts, he has plenty of time to develop additional activities that were close to his heart but which were not part of the daily necessity. At the same time, he manages to develop new enriching relationships, both professionally and personally. Guides, mentors and supporters will spontaneously come to support him in his projects, for his greatest happiness. Never short of ideas or motivation, the rare greyish periods will allow him to take a break before determining the rest of the path to follow.

Regarding the love horoscope 2023, the Year of the Rabbit can turn out to be that of amorous conquest for the celibate Dog. However, this lingering sense of impending success can also attract unscrupulous parasites with whom he had better not bother for too long. It is the Water element (Chinese element of the year 2023) which will remind him that it is better not to get enthusiastic with just anyone. If he wants to feel protected and fulfilled in his love life, the Dog must organize his time and select his partners in the most pragmatic way possible. Any disappointments will ultimately aim to give new impetus to his blockages, even if these will often be brutal cuts with some of the existing concerns.

Talismans and lucky charms 2023 of the Dog

Below, in accordance with the Chinese horoscope, you will find a detailed description of the personality and specificities of the 5 existing types of Dog, which associate the terrestrial branch of the Dog with the 5 Yang celestial trunks of WuXing and Feng Shui (Yang Wood, Yang Fire, Yang Earth, Yang Metal, Yang Water). Indeed, the Dog being a Chinese astrological sign with Yang polarity, the elements of Nature to which he can be connected are always in their Yang form. Likewise, for each Dog associated with his celestial trunk (Wood Dog, Fire Dog, Earth Dog, Metal Dog, Water Dog), discover the pillar of destiny he is associated with and its meaning, in relation to its imaged destiny.

Personality: The native of the Year of the Wood Dog is endowed with a noble, stable and powerful personality. The Yang Wood element brings to the Wood Dog his creative qualities, his generosity and his balance in his relations with others. Disinterested, honest and devoted to his family, but also capable of sporadic anger, the Wood Dog is above all an epicurean, usually an excellent cook, and always charming and popular with his friends. His professional ambition and his material comfort can only develop if he learns to rely more on himself, while taking care to listen to the people of trust who surround him.

Personality: The person born in the Year of the Fire Dog is the most optimistic of his fellows, but also the most theatrical, even insolent when he feels attacked. Pleasant and festive, seductive but faithful, he has the qualities that make him a great friend and an ideal lover. His independence and his strength of character, his revolted side against the injustices of the world, add to his Hollywood-like charisma. In general, the Fire Dog prefers the company of older people than himself, whose knowledge and wisdom make him more serene in his daily life. Incorruptible, the Fire Dog doesn't hesitate to show the fangs, and even to bite, when he considers that a situation has degenerated too much to his liking.

Personality: The native of the Year of the Earth Dog has a responsible character, and he makes his decisions for the collective interest. Skilled in mediation, the Earth Dog is also pragmatic, calm and serene. Gentler in approach than his fellow Dogs, his flair and his insight are very developed. Always cautious and alert, sometimes undecided, the Earth Dog doesn't lose his biting skills when he feels threatened or betrayed by someone he had previously gratified of his friendship.

Imaged destiny: "The wood of the plains" (Yang)
Meaning of the Earth Dog's birth pillar: Great creativity, generosity, fertility and sense of family, ability to make objective judgments, risk of frustrations and unfinished achievements due to possible difficulties in channeling an overflowing energy.

Personality: The person born in the Year of the Metal Dog can be cold and severe in his relationship to others. Honorable, austere but charitable, his personal interests closely related to the good he can do around him. It's better not to make an enemy of of him, because the Metal Dog is a tenacious opponent, who doesn't let go the trace of his prey once the hunt is launched. Conservative and patriotic, rarely in doubt of himself, the Metal Dog usually appreciates the military, political, justice and police careers.

Imaged destiny: "Gold ornaments and hairpins" (Yang)
Meaning of the Metal Dog's birth pillar: Luck and fortune at hand, exacerbated charisma, qualities of dialogue and force of conviction, ideal for those who choose the professions of politics, diplomacy, law, commerce and marketing, taste for power and pleasure in confrontation (at the risk of losing your skills).

Personality: The native of the Year of the Water Dog has the sharpest instinct of his fellows. His sense of smell and his perspicacity are qualities that allow him to always find his way and rarely go wrong. Pleasant and gifted, with an attentive ear for his friends, the Water Dog is overflowing with charm. Refined and eloquent, his company is always pleasant, especially since of all Dogs he is the least authoritarian and the most tolerant.

Imaged destiny: "The water of the great ocean" (Yang)
Meaning of the Water Dog's birth pillar: Exceptional learning and knowledge-building capacities, preference for consultancy and administration, remarkable analytical skills, risk of obstinacy and rigidity in the face of the unknown.