Year of the Goat: Personality, Horoscope for 2023

The Year of the Goat

In brief: The Goat is the Chinese zodiac sign of Art, Love and Nature. Key qualities of the 8th zodiac sign of Chinese astrology are sweetness, peacefulness, intelligence, predisposition for art and music.

The Goat is a charming and friendly person who never leaves anyone indifferent. He generally retains his legendary good humor and optimism only with those he considers worthy of his esteem. However, deep in his heart, the Goat is often anxious and hesitant.

Year of the Goat: Personality horoscope

The magic of his magnetism is an asset that allows the Goat to feel comfortable in society, and can even bring him to meet influential people for his career. His good heart and generous soul always pushes the Goat to provide assistance to the poorest, even when he himself is in a precarious situation. His enemies, jealous of his talents, often resort to deceitful methods to discredit him. In spite of this, the Goat is able to keep his faith in the world and his empathy and benevolence for those around him.

The Goat falls easily in love, to the point of being able to sincerely love several people at once. Under certain conditions, whether in friendship or in love, he is ready to endure unpleasant situations without saying a word. However, when the Goat feels that his love is not reciprocal, he scolds quickly and then jumps gracefully and with agility towards more lush pastures. In his daily life, the Goat is easily satisfied with what nature brings him, as long as the grass at his disposal remains green and fat.

The Goat also has an excellent memory. His ability to forgive easily doesn't mean that the native of the Year of the Goat remains blind to the actions of those around him. In business, if one can't say that the Goat is a born negotiator, he is however, just like the Monkey, very good at evaluating a complex situation.

When the Goat chooses an artistic or political career, he can achieve excellence and success in these two areas. In truth, the Goat can perform miracles, provided that he doesn't let himself be stunned by the idleness of an overly favorable environment and that he manages to question himself on the meaning of his life and his deep aspirations.

Indeed, the Goat, so concerned with his freedom, must remember wisely that true freedom passes through independence and that to gain access to it he must build his projects in the long term, with perseverance, and avoid any temptation to unnecessary expense.

🐐 Which kind of Goat are you?

Year of the Goat's birth dates

Year of the Goat: Fortune

Lucky Colors of the Goat

Lucky Numbers of the Goat

Celebrities born in the Year of the Goat

Year of the Goat: Love compatibility

The Goat (Sheep), the Rabbit (Hare, Cat) and the Pig (Boar) are part of the fourth compatibility triangle of Chinese astrology. Indeed, the Goat, eight sign-animal of the zodiac in the Chinese calendar, gets along naturally with the Rabbit and Pig.

Today's Chinese Horoscope for the Goat

KarmaWeather's Free Daily Goat Horoscope offers unique and accurate predictions for the 8th Chinese zodiac sign. To better understand his Chinese daily horoscope, regardless of the specific interpretation of the consulted period of the current Chinese year, the Goat must monitor the days and months governed by the energetic influence of the Ox (in particular, avoid any trip, operation or signature of contract). On the other hand, the days of the Goat, the Rabbit, the Pig and the Horse are lucky days for the Goat.

Year of the Goat: Birthstones

Chinese horoscope of the Goat during the Year of the Rabbit 2023, in love, work, career, health, luck, studies and travels

The Goat's 2023 horoscope makes the 8th animal of the Chinese calendar hope for a prosperous, colorful and fulfilling year, during which a good number of concrete and well-organized actions will give him the motivation and the confidence necessary to project himself successfully into the future. Between trips, invitations, receptions or official presentations with influential people, moments of joy will not be lacking. In this Chinese New Year 2023, the Goat has all the good favors of his friend the Rabbit (animal of the year 2023) to establish an existential base that will protect him from disappointments for years to come. 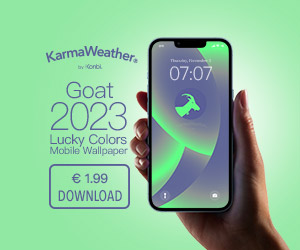 Thus, based on the 2023 career and money horoscope of the Goat, the long-awaited success is just around the corner. It can be promotion, significant career advancement or even a remodeling of professional life more in line with one's expectations. The opportunities will flow directly from the enhancement of his effectiveness on the ground, as long as the Goat takes the trouble to assert himself clearly and without timidity. Even though his ability to tackle many tasks is increased tenfold when he feels safe, the Goat must be wary of the deleterious effects caused by an exacerbated desire for control. Indeed, quality communication does not necessarily rhyme with an overly assertive frankness, just as an overly violent competitive environment can prove to be toxic for an unpracticed Goat. Other than that, when it comes to the Goat's finances, money really has the potential to trickle down in 2023 like endless warm rain, with gains that should more than satisfy his wildest hopes. However, a year of relaxation should not rhyme with a year of waste. Although his year is good in all respects, the Goat will still have an interest in putting aside his usual generosity in the closet and taking care only of his own interests and needs, in order to overcome obstacles more easily in case of difficulty.

According to the 2023 love horoscope, for the celibate Goat, the Chinese year 2023 will be all about re-shaping feelings and emotional relief. This will necessarily go through a more or less long preparation phase (or acceptance of an estrangement), before displaying one's intentions and starting to act concretely. The feeling of misunderstanding in love, as well as the fight against the desire to leave a home that no longer suits him, no longer pose any worries, as the path to transformation is allowed in 2023. Whatever the direction envisaged, the outcome of the paths taken will amuse the Goat and teach him with calm and nuance the unacknowledged secrets of happiness that are hidden in the distance.

Talismans and lucky charms 2023 of the Goat

Below, in accordance with the Chinese horoscope, you will find a detailed description of the personality and specificities of the 5 existing types of Goat, which associate the terrestrial branch of the Goat with the 5 Yin celestial trunks of WuXing and Feng Shui (Yin Wood, Yin Fire, Yin Earth, Yin Metal, Yin Water). Indeed, the Goat being a Chinese astrological sign with Yin polarity, the elements of Nature to which he can be connected are always in their Yin form. Likewise, for each Goat associated with his celestial trunk (Wood Goat, Fire Goat, Earth Goat, Metal Goat, Water Goat), discover the pillar of destiny he is associated with and its meaning, in relation to its imaged destiny.

Personality: Joyful, confident and generous, the native of the Year of the Wood Goat is clearly not a fighting Goat. He will always prefer to opt for diplomacy and compromise rather than direct confrontation. The Wood Goat, sentimental and affectionate, gives body and soul to his loved ones and to the strangers he meets and who are in need. The altruistic generosity of the Wood Goat protects him effectively when he is himself in need, for his entourage then spontaneously helps him.

Imaged destiny: "Gold in the sand" (Yin)
Meaning of the Wood Goat's birth pillar: Wisdom and nobility, taste for knowledge and faculties of introspection, glory and fortune attainable in a harmonious configuration, difficulty in projecting oneself into action.

🐐🌳 Learn more about the Year of the Wood Goat

Personality: The person born in the Year of the Fire Goat is the least timid, but also the most melancholic of his fellows. His projects are as grandiose as his propensity for spending. Dynamic and creative, the Fire Goat is also capable of uncontrollable anger when he feels unfairly criticized.

Imaged destiny: "The water of the heavenly river" (Yin)
Meaning of the Fire Goat's birth pillar: Talent for the world of art and politics, slowness in decision-making, need to develop a rigorous discipline of life to achieve success.

🐐🔥 Learn more about the Year of the Fire Goat

Personality: Unlike the other Goats, the native of the Year of the Earth Goat is capable of a measured independence. Generous, kind, always available to others, the Earth Goat is suspicious of those who ask him too many questions. Delicate and touchy, not supporting any remarks from anyone, the Earth Goat is a dreamer, capable of deploying great talents in all the artistic fields that require rigor and perseverance, such as music, painting, theater, poetry, dance and cinema.

Imaged destiny: "Fire in the sky" (Yin)
Meaning of the Earth Goat's birth pillar: Lively intelligence and pronounced taste for art, pronounced taste for the pleasures of life, tendency to repeat and risk of instability, risks of frustration if the reverie takes precedence over the need to be at the heart of the action to succeed.

🐐🗿 Learn more about the Year of the Earth Goat

Personality: Proud, aesthete, very concerned about his appearance, the person born in the Year of the Metal Goat is also secretly emotional and fragile. Jealous and possessive, in love as in friendship, the Metal Goat grants his trust only to a limited number of people, whom he chooses exclusively out of love or opportunism. His confidence, his sure taste and his multiple creative talents open to him the door to successful ventures in the Arts and Entertainment industries. The Metal Goat has an innate gift for knowing how to sell his services at a golden price; if he chooses an artistic career, he can become the richest of his fellows, and all by himself!

Imaged destiny: "The earth by the road" (Yin)
Meaning of the Metal Goat's birth pillar: Valorization of learning and knowledge, relative slowness before taking action, beneficial to intellectual professions, potential lack of openness to contradictory or new ideas.

🐐🛠 Learn more about the Year of the Metal Goat

Personality: The native of the Year of the Water Goat enjoys a great popularity with his friends and family, as he is greatly appreciated for his humility and fidelity. Superficial, impressionable and opportunistic, the Water Goat has a tendency to choose first what reassures him and asks the least possible effort from him. Any disagreement with his vision is synonymous with rejection in his eyes, which does not make him resentful anyway.

Imaged destiny: "Poplar and willow wood" (Yin)
Meaning of the Water Goat's birth pillar: Insolent luck, frail appearance masking an incomparable strength and flexibility, predisposition for artistic and sporting professions, tendency to let oneself be guided by instinct or passion at the expense of reason.

🐐💧 Learn more about the Year of the Water Goat