Year of the Dragon: Personality, Horoscope for 2023

The Year of the Dragon

In brief: In the Chinese zodiac, nobody can be more stunning and flamboyant than a person born in the Year of the Dragon. Good Luck and fortune often smile at Dragons, who rarely say no to glittery parties and the comfort of an opulent lifestyle.

According to Chinese astrology, a person born during the year of the Dragon has a sparkling energy. His proud and noble appearance impresses and creates as much admiration than envy.

Year of the Dragon: Personality horoscope

The Dragon has a rich conversation, a strong taste for fashion and an unconditional love for his family, although he also knows how to cope with loneliness when he is confronted with it. A scrupulous observer of his environment, deeply individualistic, the native of the Chinese zodiac sign of the Dragon has a visceral attraction for aesthetics, not hesitating as soon as he can to invest in a collection of works of art.

Endowed with an undeniable honesty, the judgments of the Dragon are always direct and explicit, because he isn't one to take precautions, diplomacy not being his specialty.

The apparent sincerity of his expressed feelings is due to his strong emotivity, as well as his admirable oratorical skills. However, if this aspect of the character of the Dragon can frequently guarantee him success with his audience, foolproof confidence can however turn against him when this particular trait of his character is over-exploited, over-played or misused. Trapped unwillingly in a process of self-destruction, unless he quickly recovers from a flash of lucidity, the Dragon can turn himself in the eyes of all into a raging and authoritarian character, desperately unable to question himself or face reality.

Deeply magnetic and charismatic, the Dragon loves to seduce. He thrives in being seen, applauded and admired. In public, one can very easily notice a Dragon by his eccentric outfits or by an unusual accessory that he proudly displays. Unfortunately, when his charm isn't sufficiently considered by his audience, he can become touchy and sulky. Faced with what the Dragon feels like a lack of recognition, it becomes useless to try to oppose him in serious conversation, or even to try to have the last word with him. Indeed, even in a situation that is commonplace or seemingly casual, you would then risk suffering the burns of his angry flames. In general, it is better to let the Dragon do as it pleases him than to try to compete with him, because he won't let anyone steal the show, unless, magnanimously, he decides otherwise.

Stubborn but persevering, the prestigious native of the Year of the Dragon tends to cling durably to fixed ideas. Fortunately for him, if a project or a situation doesn't turn out in his favor, the Dragon always has inside of him the instant ability to erase it all from his mind. Without any regrets, he then resumes the course of his existence, adorned with his brand new bright ambitions. If you have the chance to meet a Dragon on one of his best days, graceful and splendid, like the phoenix rising from the ashes, he shall gladly let you enjoy his dazzling energy and warm benevolence.

Indeed, it is good to keep in mind that under the thick armor of pride, scales and artifices that covers the Dragon, also hides an intelligent personality, always courageous and sentimental with those he loves.

🐲 Which kind of Dragon are you?

Year of the Dragon's birth dates

Year of the Dragon: Fortune

Lucky Colors of the Dragon

Lucky Numbers of the Dragon

Celebrities born in the Year of the Dragon

Year of the Dragon: Love compatibility

Today's Chinese Horoscope for the Dragon

KarmaWeather's Free Daily Dragon Horoscope offers unique and accurate predictions for the 5th Chinese zodiac sign. To better understand his Chinese daily horoscope, regardless of the specific interpretation of the consulted period of the current Chinese year, the Dragon must monitor the days and months governed by the energetic influence of the Dog (in particular, avoid any trip, operation or signature of contract). On the other hand, the days of the Dragon, the Rat, the Monkey and the Rooster are lucky days for the Dragon.

Year of the Dragon: Birthstones

Chinese horoscope of the Dragon during the Year of the Rabbit 2023, in love, work, career, health, luck, studies and travels

According to the 2023 Chinese horoscope of the Dragon, the Lunar New Year conjunctions predict a transitional and eventful year for the Dragon. The general dynamic indicates a succession of inconstant, cyclothymic and sometimes even procedural periods. This year, the Dragon can expect unprecedented developments in most areas of his existence. The efforts of the past will be rewarded in the wake of small tests that he will have to carry out. In 2023, the Rabbit, animal of the year and the fourth sign of the Chinese calendar, provides the Dragon with the means to correct himself and to begin a process of rebirth with a new shell, rid of its cracks and other crevices. 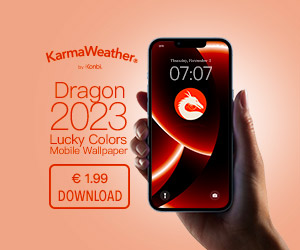 But let us remember it without delay: all the periods marked by calm and silence will be followed by colorful and invigorating episodes. This is why, before beginning the redesign of his own 12-year cycle from the year 2024, the Dragon is called upon to take advantage of the year 2023 to clean up the debris of his past. It is time for him to put away his exuberant coat of scales to better face the reality of the hardships he has managed to circumvent in previous years. Unpleasant but inevitable moments before proceeding with his moult, the Dragon will have, in the course of 2023, and this in spite of the benevolence of the Rabbit, to account for his former vanity and stubbornness.

In accordance with the Chinese horoscope 2023, the Dragon will have to avoid falling into the traps that he has set himself without realizing it. Because in case of inattention, prejudices and unjustified negative considerations will catch up with him to subject him to existential questions. 2023 is the year of the turning point and the year of the last chance for all the Dragons who have been taken aback in the past months. The Water Rabbit (of the year) offers a multitude of paths to take, some with more caution than others. For the Dragon, the Chinese year 2023 will be one of important decisions that will inevitably pass through the filter of reason and humility.

Talismans and lucky charms 2023 of the Dragon

Below, in accordance with the Chinese horoscope, you will find a detailed description of the personality and specificities of the 5 existing types of Dragon, which associate the terrestrial branch of the Dragon with the 5 Yang celestial trunks of WuXing and Feng Shui (Yang Wood, Yang Fire, Yang Earth, Yang Metal, Yang Water). Indeed, the Dragon being a Chinese astrological sign with Yang polarity, the elements of Nature to which he can be connected are always in their Yang form. Likewise, for each Dragon associated with his celestial trunk (Wood Dragon, Fire Dragon, Earth Dragon, Metal Dragon, Water Dragon), discover the pillar of destiny he is associated with and its meaning, in relation to its imaged destiny.

Personality: Generous and curious, logical and clever, the native of the Year of the Wood Dragon tends to loose his energy by trying to look at all costs for a logical meaning to everything. Less egocentric and more diplomatic than his fellows, the Wood Dragon is the only one of the Dragons to have the ability to hide behind his thick shell of scales the intact reality of his domineering ambition.

🐲🌳 Learn more about the Year of the Wood Dragon

Personality: Demanding, rightful, generous and expansive, the person born in the Year of the Fire Dragon can also show angry and imperious demeanor with his entourage. The Fire Dragon can't stand any contradiction and has great difficulty to question himself. Nonconformist, even revolutionary, the Fire Dragon is an empire builder, as long as he manages to counterbalance his thirst for power with a saving humility, the nature of which unfortunately did not endow him much on the year of his birth.

Imaged destiny: "The earth buried in the sand" (Yang)
Meaning of the Fire Dragon's birth pillar: Openness to others and always a good adviser for friends of the moment, calculated generosity, uninhibited ambition, propensity to be disproportionately proud, risk of superficiality when the taste for appearances takes over.

🐲🔥 Learn more about the Year of the Fire Dragon

Personality: The native of the Year of the Earth Dragon is brave, stoic and proud. Rather than being an autocratic despot, the Earth Dragon is known to be more open, just and noble in his relationship with the other signs of the Chinese zodiac. This doesn't diminish his inflexible determination to pursue the objectives he set for himself.

🐲🗿 Learn more about the Year of the Earth Dragon

Personality: The person born in the Year of the Metal Dragon is a daredevil who doesn't mince his words. Always on the move, the Metal Dragon has very clear ideas about the direction he decides to take. Deeply honest, brave and idealistic, the Metal Dragon doesn't hesitate to put himself at risk to defend his beliefs. At work, his original and outside the box initiatives allow the Metal Dragon to open up new territories, hitherto unexplored.

Imaged destiny: "The bronze of the white candlestick" (Yang)
Meaning of the Metal Dragon's birth pillar: Unyielding determination, combativeness and strength of will, deep convictions, seeks to impose one's ideals on others, inclination to over-react to the slightest annoyance, assumed aggressiveness.

🐲🛠 Learn more about the Year of the Metal Dragon

Personality: Altruistic and open to the world, the native of the Year of the Water Dragon is the most discreet and the less authoritarian of his fellows. If the Water Dragon is ready to compromise, that doesn't mean he won't ultimately seek to impose his authority, like any self-respecting Dragon. Generosity is not his forte, which doesn't mean that in case of need, he's incapable of taking under his wing those of his relatives who find themselves in need.

Imaged destiny: "The water of the great river" (Yang)
Meaning of the Water Dragon's birth pillar: Love of power, money and material possessions, taste for travel and openness to different cultures, brings luck and prosperity to those around him, inclined to neglect important subjects.

🐲💧 Learn more about the Year of the Water Dragon