Year of the Rabbit: Personality, Horoscope for 2023

The Year of the Rabbit

In brief: The Chinese zodiac sign of the Rabbit is intelligent, realistic, cautious and fathomless. People born in the Year of the Rabbit are down to earth and creative persons. However, whenever their happiness is at stake, they can easily tend to avoid reality.

The Rabbit favors the pursuit of his personal satisfaction, while avoiding the sinuous and tiring roads, or frontal disputes. In extreme cases, the Rabbit will choose without hesitation to cut himself off from the world in order to survive peacefully without being disturbed.

Year of the Rabbit: Personality horoscope

The Rabbit loves above all stability, comfort, studies, books, art and social life. If he turns his back on vulgarity and conflict, the Rabbit doesn't hesitate to join an argument if he believes that the limits of his tolerance have been crossed. For your own sake, be careful not to interrupt a Rabbit at the wrong time, or to get too close of his personal space. For if he is apparently harmless, a potentially ferocious feline slumbers in him. Let's not forget that in Vietnam and South-East Asia, the Chinese zodiac sign of the Rabbit is replaced by a Cat from which he inherits the same attributes.

Ambitious and talented, discreet and sensitive, the Rabbit is one of the most literate signs of the Chinese zodiac, in addition to his oratorical and commercial skills. The Rabbit is a caring friend, pleasant and indulgent, most of the time charming and a good listener. However, the Rabbit can also be stubborn and touchy, which can push him to get into uncontrollable bursts of anger.

If the Rabbit is willingly romantic, it doesn't mean that he would sacrifice his tranquility on the altar of a great passionate love. Never completely comfortable with the world of emotions, the Rabbit seeks in his home security and a safe haven. A comfortable nest, good meat and a private space, it's just about everything you need to satisfy and hold a Rabbit by your side.

In business, the Rabbit is a fine strategist who can return to his advantage any kind of delicate situation thanks to his analytical ability, his patience and his unparalleled flair, qualities which people who stop their judgment on appearances and on the artifices of money are unable to detect. Thus, the Rabbit can never be abused for too long by those who have the audacity to confuse his kindness for naivety and who thought, wrongly, that they could enjoy his services cheaply.

🐰 Which kind of Rabbit are you?

Year of the Rabbit's birth dates

Year of the Rabbit: Fortune

Lucky Colors of the Rabbit

Lucky Numbers of the Rabbit

Celebrities born in the Year of the Rabbit

Year of the Rabbit: Love compatibility

The Rabbit (Hare, cat), the Goat (Sheep) and the Pig (Boar) are part of the fourth compatibility triangle of Chinese astrology. Indeed, the Rabbit, fourth sign-animal of the zodiac in the Chinese calendar, gets along naturally with the Goat and the Pig.

Today's Chinese Horoscope for the Rabbit

KarmaWeather's Free Daily Rabbit Horoscope offers unique and accurate predictions for the 4th Chinese zodiac sign. To better understand his Chinese daily horoscope, regardless of the specific interpretation of the consulted period of the current Chinese year, the Rabbit must monitor the days and months governed by the energetic influence of the Rooster (in particular, avoid any trip, operation or signature of contract). On the other hand, the days of the Rabbit, the Goat, the Pig and the Dog are lucky days for the Rabbit.

Year of the Rabbit: Birthstones

With the advent of the Year of the Water Rabbit on January 22, 2023, an atmosphere of physical serenity and mental relaxation takes over. Without a doubt, the Rabbit, the fourth zodiac sign of the Chinese calendar, will be the first to know how to take advantage of these positive dynamics.

According to the Chinese horoscope 2023 of the Rabbit, the 4th Chinese zodiac sign is seriously considering putting aside all the difficult resolutions he used to follow. It goes without saying that his own year portends him a prosperous period, during which he can expect to be often rewarded for his past generous deeds. In 2023, the Rabbit finally enjoys the fruits of his investment in his work. Unprecedented opportunities will be offered to him on a plate, whether in the form of a promotion accompanied by a substantial salary increase or even a profitable investment for his company. Those who still hesitated to change paths will have the opportunity to make decisions in accordance with their evolution. In love, the single Rabbit can meet his soul mate. Each Rabbit will possess, for a limited time, the potential to find in himself a great strength of will to achieve his multiple objectives. 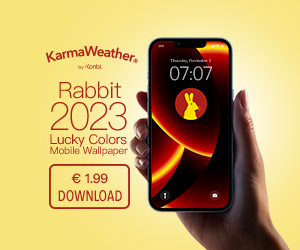 However, it is important not to forget that the Rabbit can also generate a dynamic that is the opposite of what is expected of him. The possible negative points to look out for in 2023 will be associated with the Metal element, namely the risk of financial loss, legal problems and betrayal. Thus, in 2023, it is during the days and months in complete excess or total lack of the Metal element that the Rabbit will have to be particularly careful before granting his trust (or his signature) to bankers, insurers or landowners.

Still, the serene Rabbit, sitting against a tree on the edge of a lake, will be able to perceive, in the luminous reflections iridescent by the morning breeze, formulas capable of guaranteeing his serenity for the next 12 years. Depending on his current mood, somewhat fueled by his insomniac impulses, the Rabbit will understand the meaning of the unbreakable links he has forged with his intrinsic values. His wisdom nourished and restored, he will finally be able to savor the exemplarity of a rooted maturity. Also, at the beginning of their own 12-year cycle, people born in the Year of the Rabbit will be able to improve their outlook on life. From now on, it will be a question of returning to oneself and to one's origins, even if it means accepting with bitterness the presence of wounds of the soul which will perhaps never be erased and will have to be accepted as they are. Once this memorial archiving work has been done, the Rabbit will acquire the essential instinct necessary for anyone succeeding in life with honor and fulfillment. In his moments of hesitation, the Rabbit is just invited to rank his priorities by avoiding scattering. It is in this fashion that he will maintain the course of his objectives and manage to avoid the vice of traps hidden under beds of vibrant leaves.

Talismans and lucky charms 2023 of the Rabbit

Below, in accordance with the Chinese horoscope, you will find a detailed description of the personality and specificities of the 5 existing types of Rabbit, which associate the terrestrial branch of the Rabbit with the 5 Yin celestial trunks of WuXing and Feng Shui (Yin Wood, Yin Fire, Yin Earth, Yin Metal, Yin Water). Indeed, the Rabbit being a Chinese astrological sign with Yin polarity, the elements of Nature to which he can be connected are always in their Yin form. Likewise, for each Rabbit associated with his celestial trunk (Wood Rabbit, Fire Rabbit, Earth Rabbit, Metal Rabbit, Water Rabbit), discover the pillar of destiny he is associated with and its meaning, in relation to its imaged destiny.

Personality: Hedonistic, friendly and tolerant, generous and understanding, the native of the Year of the Wood Rabbit sometimes shows a little too much carelessness in his social and professional relationships, which may harm him by attracting around him unscrupulous people, who might shamelessly take advantage of his kindness. The person born in the Year of the Rabbit, whose diplomatic skills and taste for working in a group are highly developed, must however fight against his natural inclination to make arbitrary decisions whenever he feels threatened. In case of failure to control his rebellious nature if his tranquility is disturbed, the inflexible behavior of the Wood Rabbit could inadvertently offend the very same people he needs to achieve his goals successfully.

Imaged destiny: "Water from the great spring" (Yin)
Meaning of the Wood Rabbit's birth pillar: Innovation and creativity in all areas, excellent memory and ability to assimilate knowledge, predisposition for intellectual professions in a protected environment, friendly character but often misunderstood and jealous, latent authoritarian tendencies, psychological weaknesses to identify in order to better overcome them.

🐰🌳 Learn more about the Year of the Wood Rabbit

Personality: The person born in the Year of the Fire Rabbit loves to trust his intuition. His playful and expressive character, combined with his strong temperament, go along with a sometimes impatient or angry mood. Usually, the Fire Rabbit flourishes in positions where he can have a direct impact on events. He also prefers to resolve conflicts indirectly, avoiding face-to-face confrontations as much as possible.

🐰🔥 Learn more about the Year of the Fire Rabbit

Personality: The native of the Year of the Earth Rabbit is serious, stable and confident. Though materialistic and potentially manipulative, he remains a friendly personality. The Earth Rabbit prefers to escape unpleasant situations, except when his family and those he loves are directly concerned. Despite his egocentric and solitary trend, the Earth Rabbit, always pragmatic, still manages to quickly identify his faults and correct them. Indeed, the Earth Rabbit knows for a fact that the adjustment and correction of his defects are the necessary condition to the successful continuation of his existence.

Imaged destiny: "The earth on the ramparts" (Yin)
Meaning of the Earth Rabbit's birth pillar: Peaceful temper, gift for strategy, flawless realism and determination, remarkable stability, privileged personal pleasures on common well-being, lack of fantasy, risk of avoiding any action that does not directly affect comfort of the individual.

🐰🗿 Learn more about the Year of the Earth Rabbit

Personality: Ambitious, observant, responsible, sophisticated and hard working, the person born in the Year of the Metal Rabbit is the most stable and the most robust of Rabbits. He usually favors intelligence to beauty when making the severe selection of his friends. Metal Rabbits have the potential to become famous artists or bright collectors, provided they manage to better control of their inhibitions.

🐰🛠 Learn more about the Year of the Metal Rabbit

Personality: Thoughtful, emotional, impressionable, indecisive, but always surrounded by true friends, the native of the Year of the Water Rabbit is traditionally regarded as the weakest of his kind. The Water Rabbit must always be careful not to be influenced or controlled, by unscrupulous and malicious people. Gifted with a formidable memory, the Water Rabbit must also be careful not to take refuge in the past and even paranoia, as he takes the risk in return of lacking clarity and realism in his appreciation of everyday situations.

🐰💧 Learn more about the Year of the Water Rabbit